Crescent Moon, Steamboat Geyser, in Yellowstone National Park's Norris Geyser Basin. Steamboat Geyser is the world's tallest geyser and goes years and years between eruptions. During major eruptions boiling water, steam and calcium carbonate sinter may be thrown more than 300 feet into the air. Steamboat's major eruptions last from 3 to 40 minutes, and are followed by powerful jets of steam. This impressive steam plume is merely the aftermath of the eruption.

While on my pre-dawn journey to the Hayden Valley in Yellowstone on 8/1/2013 in hopes of capturing wolf photos, while passing Norris Geyser Basin I saw huge plume of steam rising from the geyser basin in the vicinity of Steamboat Geyser which rarely erupts. Considering this suspicious steam plume where there usually isn’t one, I aborted my wolf chase and went to check out this plume of steam.

Racing down the trail I bumped into a guy named Andy, a geyser gazer, who informed me Steamboat had erupted the previous evening at about 7PM, dang it I was there 5 hours previous walking the basin.

A day late and a dollar short as usual I still felt fortunate to still be around to photograph the steam plume aftermath crowned with a crescent moon shortly before sunrise. 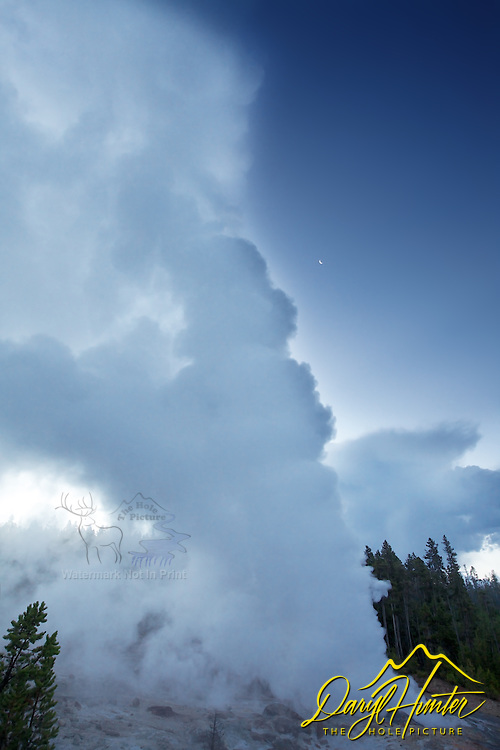